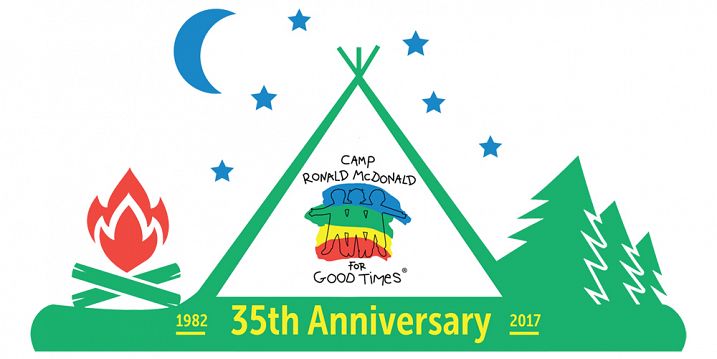 1977     Southern California Children’s Cancer Services, Inc. (SCCCS) is formed to provide aid and comfort to children with cancer and their families

1980     The Ronald McDonald House of Los Angeles opens providing a home-away-from-home for the families of young patients being treated at nearby Children’s Hospital of Los Angeles.

1982      APRIL - Camp Good Times is founded to provide a residential camping program for children with cancer.

JUNE - McDonald’s Operators’ Association of Southern California (MOASC) pledges to support the Camps effort and the Camp is renamed to Camp Ronald McDonald for Good Times®.

1985     JANUARY - Camp is featured in Reader’s Digest and catches the attention of  President Ronald Regan. Camp becomes one of the President’s public charities.
Campers from Israel, France, England and Belgium travel to attend summer  camp sessions.
Michael Landon films a two part episode of the popular TV Series “Highway to Heaven” featuring Camp and uses campers in key roles. The episodes “A Song for Jason,” airs on NBC as is seen my 25 million people.

1989     NOVEMBER - 77 Brothers and sisters of cancer patients attend the first Sibling Camp weekend.
Children with cancer travel from U.S.S.R./Russia and Norway to attend summer camp sessions and are visited by President and Mrs. Reagan.

1994     SEPTEMBER – The charity purchases 59-acre camp facility in the San Jacinto Mountains, Riverside County to support the growing need for children with cancer and their families.

At Living Spaces, we make furniture shopping fun and easy with our wide selection of exciting, well-priced designs so you can celebrate life's moments in a home you love.

Vincent Dominguez is one of the happiest kids you’ll ever meet! To know him is to love him